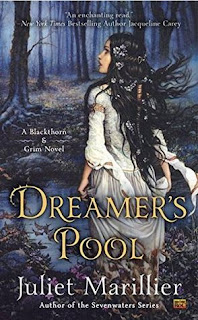 "'Human memory is a strange thing,' he observed. 'How it comes and goes. How sometimes folk tuck the past away so deep they forget it's there at all. The human mind is full of byways, dead ends, locked chambers. Strongboxes guarding matters too painful to be brought into the light; dusty corners where items considered too trivial are tossed away.'" (p. 145)

Beginning a new Juliet Marillier series is always an exciting endeavor. Having read all but one of her previously published series, I know that I am about to embark on an immersive and magical adventure.

We are introduced to Blackthorn and Grim, who have suffered inconceivable torture at the hands of Mathuin of Laois. Sprung from the lockup by a fey nobleman named Conmael, who forbids Blackthorn from exacting her revenge, the two embark on a journey to Dalraida. The publisher's synopsis on the back cover gives a rather uninteresting description of events. I much prefer the author's synopsis from her website (featured below).

Blackthorn has faced so much pain, both emotional and physical, that she struggles to let anyone get too close. Having grudgingly accepted the fact that Grim will be her companion, and despite the fact that Grim was witness to much of her abuse, she keeps him at a distance. Throughout the book, her stubbornness tends to get exhausting, but, given her experiences, I cannot blame her.

Grim has his own dark past, but his history is not revealed in this book. Having Blackthorn close allows him to begin to heal, even if she is frustratingly resistant to his friendship. Grim may be cast as a simpleton, but he has an innate gift for seeing what others may overlook.

As for the task at hand, it becomes quickly apparent that something has changed Prince Oran's betrothed into someone that he, and even her own dog Bramble, does not recognize. Marillier always gives the reader just enough insight in measured doses throughout the book and expertly keeps the reader intrigued.

Having completed the entire series prior to writing this review, I can say with confidence that the world that Marillier has constructed in the Blackthorn & Grim series is one that will engulf you from beginning to end.

What if you were locked up awaiting execution and a stranger offered you a bargain that would set you free? What if accepting bound you to certain rules of behavior for seven years, rules you knew you were likely to break within days? And what if the penalty for breaking them was to find yourself back where you started, eaten up with bitterness and waiting to die?

Blackthorn chooses life, even though she must promise no to seek vengeance against her arch-enemy, Lord Mathuin. In company with a cell-mate, the hulking, silent Grim, the one-time healer and wise woman flees north to Winterfalls, where she settles on the fringe of the mysterious Dreamer's Wood. Blackthorn has promised her benefactor, the fey nobleman Conmael, that she will use her gifts only for good. But she and Grim are both scarred by the past, and the embittered healer finds her promise increasingly hard to keep.

At Winterfalls, Prince Oran of Dalraida has been eagerly awaiting the arrival of his bride, Lady Flidais. Her portrait and letters have convinced him she is his perfect match. But letters can lie, and Oran finds himself trapped in an untenable situation. When he asks Blackthorn and Grim for help, they are swept up in a mystery that will require all their resources to solve: courage, ingenuity, leaps of deduction, and a readiness to accept the uncanny. Hardest of all will be grappling with their own demons.