The Raid by Steven Konkoly 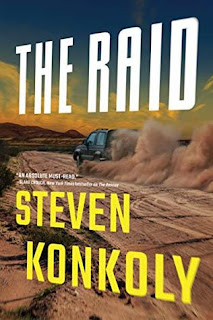 "If this was the end, he was going down with a bellyful of the best scotch money could buy. He had no idea what the team out there had in store for him,, and he had no intention of finding out--sober." (loc.4722, uncorrected proof)

First, I would like to thank Netgalley and Thomas & Mercer Publishing for providing me with a free Kindle ARC of this novel in exchange for an honest review.

Having read The Rescue, I felt that this book was much better. The prequel had left me with some nagging questions. The current text doesn't have the same plot holes that I felt The Rescue had. My only complaint, really, is that there never is any resolution whatsoever to the presence of the five children in the desert who are found by the Border Patrol agents at the beginning of the book. Who were they? What happened to them? How did they have anything at all to do with the cartels, or the story in general? It felt as if their existence was created purely for shock and awe.

Action books are not my personal favorite, but this book kept the action level high and was full of comedic banter between characters, so the entertainment was definitely there. I could see this series being picked up by Hollywood with actors like Jason Statham and Liam Neeson.

Still hoping for a spin-off series centered around Harlow and her badass team! They are the real heroes in this series!

After exposing and dismantling a deep-state conspiracy that nearly destroyed his life, Ryan Decker finds his covert skills have put him on the radar of influential Senator Steele. Now Steele needs his help. Two patrol agents were killed in a bizarre explosion near the US-Mexico border—and the evidence doesn’t line up with the official story.

Enlisted by Steele to run an undercover, off-the-books investigation, Decker and his partner, Harlow, head to the border town of Tecate. But when they’re caught in an ambush, Decker realizes they’ve stumbled onto something far more dangerous than any of them understood.

The cover-up is rooted deep in the Department of Defense itself. Fearful for their own lives and unable to trust anyone outside their small circle of skilled associates, Decker and Harlow set in motion a risky plan to stop a criminal conspiracy.