The Rescue by Steven Konkoly 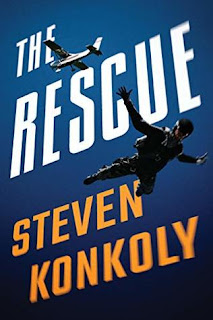 "Jacob Harcourt disconnected the call and walked over to the cocktail cabinet built into the cherry wall next to his desk. He poured a sorely needed early-afternoon bourbon. The news from Gunther Ross was disturbing on many levels. Decker's stubborn insistence on not dying represented a clear and present danger to the scheme he had meticulously cultivated for close to a decade." (p. 45)

First, I would like to thank Amazon First Reads for the opportunity to read a free Kindle version of this book.


Unfortunately, I don’t have much positive to say in regards to The Rescue. The fact that it took me over two weeks to read a 390-page book is an indication of how unsatisfying this read was. The first few chapters are action-packed, but once we hit chapter 15, the story becomes dull and all action completely stops until the very end (there are 65 chapters in total).

The premise of the book is unbelievable: we are expected to accept that a senator would destroy the life of the man who led the mission to rescue her daughter simply because his mission failed, and we are expected to accept that the legal system would lock him away for 10 years for not saving her in time. We are expected to accept that all of his comrades in World Recovery Group and their families were brutally slaughtered after trial and that no one did anything about it or realized that perhaps Ryan Decker was not to blame after all. We are also supposed to see Ryan Decker as a badass, but it seems to me that the real badasses are Harlow and her team and Ryan Decker is just along for the ride. (A spin-off series about Harlow and her team is something I would definitely read, by the way.)

It’s not a bad story, it’s just nothing new in the action genre. A brief explanation of how exactly the legal system found Ryan Decker guilty of…well, whatever charges he was supposedly guilty of, as the charges are not named either, come to think of it…would have set this story up for success. This gaping hole in the plot gnawed at me the entire duration of the book and it was difficult for me to take the rest of it seriously.

Former CIA operative turned mercenary for hire Ryan Decker’s specialty is rescuing kidnap victims. Hired by an influential US senator to liberate her daughter from a human-trafficking ring, Decker never anticipated sabotage or that the assault could go so disastrously wrong. The hostage is dead. His team is wiped out, and so are their families, including Decker’s own wife and son—eliminated one by one by the Russian mafia. And he’s survived to take the fall.

When he’s inexplicably freed soon into a ten-year sentence in federal prison, Decker suspects another setup. And private investigator Harlow Mackenzie knows he’s right. She has evidence that a power greater than the Russian mob was behind the raid that ruined Decker’s life.

The next move in a nationwide cat-and-mouse game of high-level sedition is up to them. Fueled by revenge and an obsession to clear his name, Decker has only one mission: to destroy a growing conspiracy before it’s too late.