The River Girls by Melinda Woodhall 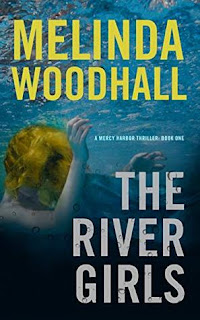 "'The butterflies always seem to prefer the Lily of the Nile for some reason,' she said to Eden. 'They must want to spend the little time they have surrounded by the biggest, most beautiful thing they can see.'" (loc. 982, uncorrected copy)

First, I would like to thank BookSirens and Creative Magnolia for providing me with a free Kindle ARC of this novel in exchange for an honest review.

Second, I have to warn readers of the potential triggers that you will find in this book. There is discussion of sex trafficking, murder, violence, domestic abuse, and drug use. This may be distressing for some readers.

Eden Winthrop has faced immense trauma, finding her younger sister's lifeless body after she was killed in a murder-suicide by her abusive husband. Although she is still haunted and grieving, she is determined to help other women in similar situations and establishes a network of safehouses.

She struggles daily with anxiety and has an emotional support dog who never leaves her side. His presence calms her nerves enough to help her stay off the prescription medications she was once reliant upon. I found that Melinda Woodhall wrote Eden's character beautifully. It is frustrating when a character is weak, but Eden is far from weak. Despite her horrific past, and despite her crippling anxiety, she refuses to stand by while women and children are abused at the hands of their partners or sex traffickers. Woodhall demonstrates how integral an emotional support dog's presence is to normal daily functioning for individuals with post-traumatic stress disorder.

When a teenage girl arrives at one of Eden's safehouses, but promptly disappears, Eden knows this girl is in imminent danger and is compelled to find her. When not one girl, but two, are found dead near the river, killed by strangulation, her determination grows to return this girl safely home. She enlists the help of her sworn enemy—the defense attorney who was responsible for her sister's husband being released, leading to her sister's murder—because despite everything, he may be the only person who can lead her to the truth.

This book was an amazing read and I am so eager to dive into the next book in the series!

When the body of a missing girl washes up on the banks of the Willow River, the killing is linked to two cold case murders, and the investigation must uncover the twisted motive of a serial killer before he kills again.

Still reeling after her sister’s brutal murder, grief-stricken Eden Winthrop has returned to Willow Bay, where she runs the Mercy Harbor Foundation, a safe haven for victims of violence.

When a teenage trafficking victim disappears from a shelter run by her foundation, Eden is drawn into the search for the sadistic killer. The hunt becomes personal when Eden's niece is abducted just as the body of yet another victim is discovered in a local river.

In a desperate effort to save her niece, Eden must partner with the small-town police force that had failed to save her sister. And to catch the killer, she realizes she must trust the one man she vowed to never forgive and summon the strength to face her deepest fears.