The Ruin by Dervla McTiernan 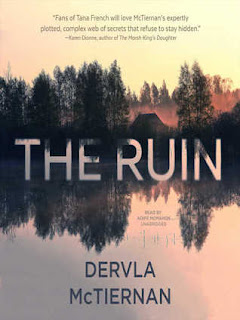 "And now they were silent. Both of them. Exchanging meaningful glances as if urging the other to take the lead. Finally, the young woman turned back towards her and stepped forward, taking Aisling gently by the upper arm. 'I'm very sorry, Aisling. So very sorry." (Transcription from Chapter 1)

This is the first book in the Cormac Reilly series, but the second book chronologically. The Sisters is an Audible Original (and available only on Audible) and takes place about 10 years prior to this novel, when Detective Sergeant Carrie and her sister Aifric were first starting out in their careers.

Compared to The Sisters, this book is exceedingly better. I am glad I read this book despite the fact that I had not been keen on its prequel. This book does not rely whatsoever on any of the storyline in The Sisters, so if you do not have an Audible subscription, you are not missing out.

The story is tragic in many ways, and especially in Aisling's story. Aisling has just found out that she is pregnant, although she is not ready to be a mother due to just beginning her career as a surgeon, and then her boyfriend Jack is found dead, seemingly having killed himself. Then, there is the story of Jack's childhood with his sister Maude, neglected by an alcoholic mother and suffering physical abuse. Even more tragedy develops as the story unfolds. These dark themes may be difficult for some readers, but McTiernan addresses them delicately.

Despite the darkness, McTiernan's writing is crisp and powerful. Her characters have depth, and the protagonists are strong and dedicated. Although the characters have suffered, there is a positivity in each of them that makes them inspirational. The story is original and well-developed, absolutely beautiful against the tragic themes.

The narrator of the audiobook, Aoife McMahon, did a phenomenal job. Her inflections were perfect for the tone of each dialogue. Characters are easily discernable. She is a large reason why I have ordered the next book in the series on Audible. I truly look forward to continuing this series.

It's been twenty years since Cormac Reilly discovered the body of Hilaria Blake in her crumbling Georgian home. But he's never forgotten the two children she left behind...

When Aisling Conroy's boyfriend Jack is found in the freezing black waters of the river Corrib, the police tell her it was suicide. A surgical resident, she throws herself into study and work, trying to forget - until Jack's sister Maude shows up. Maude suspects foul play, and she is determined to prove it.

DI Cormac Reilly is the detective assigned with the re-investigation of an 'accidental' overdose twenty years ago - of Jack and Maude's drug- and alcohol-addled mother. Cormac is under increasing pressure to charge Maude for murder when his colleague Danny uncovers a piece of evidence that will change everything...

This unsettling crime debut draws us deep into the dark heart of Ireland and asks who will protect you when the authorities can't - or won't.