The Winemaker's Wife by Kristin Harmel 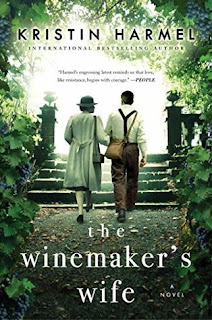 "'Now, where were we?' Grandma Edith asked after she'd taken a long sip of her cocktail, her third since boarding. Clearly the secret to the old woman's longevity was an unwavering commitment to pickling her liver." (loc. 448, uncorrected proof)

First, I would like to thank NetGalley and Gallery Books for providing me with a free Kindle ARC edition of this novel in exchange for an honest review.

I absolutely loved this book. Honestly, what's not to love? World War II history, winemaking, a love triangle, and a sharp grandmother who keeps you on your toes in between sips of her martini!

There are two alternating timelines with three different narrators. The stories of Inès and Céline begin in 1940, whereas Liv's story begins in 2019.

Inès is the wife of Michel Chauveau, who owns the winery Maison Chauveau. She struggles with feelings of loneliness and inadequacy, which drive her to make rash decisions that endanger her life and others'. Despite Michel and Céline's judgments of Inès, the author writes her character in a way that allows you to sympathize with her...to a point.

Céline is married to the chef de cave of the Maison Chauveau, Theo. The couple lives in a cottage on the winery grounds, so their lives are closely intertwined with Michel and Inès. Half Jewish, she is in constant fear for her father and her paternal grandparents as Jews are increasingly arrested under frivolous charges. Her husband is keen to ignore everything outside of the work at hand, imagining that everything will blow over in due time. Working in close proximity, Céline finds solace with Michel, and despite her good intentions, things will become complicated.

Liv, recently divorced, is whisked away to France by her elderly grandmother without explanation. The more she figures out her grandmother's reasoning for doing so, the harder her grandmother pushes her away. Has she brought Liv across an entire ocean to play matchmaker? Or is there a deeper reason...a painful history that is too difficult to share?

Although there are many true historical facts about the contributions of the people of Reims to le Résistance, the main characters and the Maison Chauveau are fictional. There are also phrases spoken in French and German throughout the book. I believe the phrases in both languages are written with enough context to allow someone who speaks neither language to understand the phrases without the help of a translator.

This book was captivating: heartbreaking yet heartwarming, tragic yet uplifting. It is now at the top of my recommendations list for anyone who loves historical fiction!

The author of the “engrossing” (People) international bestseller The Room on Rue Amélie returns with a moving story set amid the champagne vineyards of northern France during the darkest days of World War II, perfect for fans of Kristin Hannah’s The Nightingale.

Champagne, 1940: Inès has just married Michel, the owner of storied champagne house Maison Chauveau, when the Germans invade. As the danger mounts, Michel turns his back on his marriage to begin hiding munitions for the Résistance. Inès fears they’ll be exposed, but for Céline, half-Jewish wife of Chauveau’s chef de cave, the risk is even greater—rumors abound of Jews being shipped east to an unspeakable fate.

When Céline recklessly follows her heart in one desperate bid for happiness, and Inès makes a dangerous mistake with a Nazi collaborator, they risk the lives of those they love—and the champagne house that ties them together.

New York, 2019: Liv Kent has just lost everything when her eccentric French grandmother shows up unannounced, insisting on a trip to France. But the older woman has an ulterior motive—and a tragic, decades-old story to share. When past and present finally collide, Liv finds herself on a road to salvation that leads right to the caves of the Maison Chauveau.