This Side of Tomorrow by Sally White 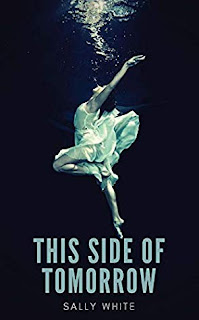 "He stood like a statue as I approached, stopping inches away. My hair was pulled to the side, and his eyes moved to my exposed shoulder/ I held my breath as he lifted his fingers and slowly traced a path up my arm, over my shoulder and behind my neck, leaving a trail of spirit energy tingling on my skin." (loc. 2522)

First, I would like to thank Book Sirens and Sally White for providing me with a Kindle copy of this novel in exchange for an honest review.

I was grabbed initially by the beautiful cover art on this book. This is my first book from Book Sirens, and I am incredibly impressed. The premise of the novel is very reminiscent of Twilight and Fallen, but with ghosts instead of vampires or fallen angels. In fact, I feel that this is written much better than the first books in either of those series. I would highly recommend this book to fans of either.

I don't know what it is, but I'm a sucker for books where the main character is torn between loving two different people. Rachel has a perfect boyfriend named Parker, but she is also in love with Parker's friend Noah, even though Noah died in a car accident before she ever met him. (Maybe it's just me, but I am definitely #teamnoah, no matter how inconceivable that relationship might be.)

Noah has taken it upon himself to protect Rachel from his younger brother Ethan, who also died in the wreck. Ethan is violent and obsessive and will hurt anyone who stands in the way of him getting what he wants: Rachel, all to himself.

There were a couple scenes that did not quite make sense with the narrative, such as Rachel meeting with a medium and being scared about what might happen, even though she can see and speak to spirits on her own. Otherwise, I truly enjoyed every minute and I really hope there may be a sequel in the future. Bravo, Sally White!

Life isn't fair...and neither is death.

When seventeen-year-old Nebraskan Rachel Sutton moves into her new home in Maine. she quickly discovers it is the former residence of Noah and Ethan Thompson, teenage brothers recently killed in car crash. Brothers who have yet to move on.

Ethan, spiteful and jealous, is obsessed with Rachel, and Noah, guilt-ridden and gorgeous, is trying to save his brother’s soul. As Rachel spends countless hours with Noah, and dates Parker Redding, a popular football player, she finds herself torn between her feelings for the living and the dead.

One fateful night, Rachel must choose. Will she embrace her life on earth with those who love her? Or find out what’s on the other side?

Disclaimer: By clicking the link below, you will be directed to Amazon.com through my affiliate link. Should you decide to make a purchase, I may earn a small commission at no cost to you. This commission helps to cover costs associated with running this blog.