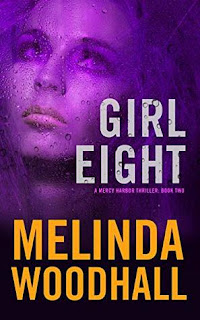 First, I would like to thank BookSirens and Creative Magnolia for providing me with a free Kindle ARC of this novel in exchange for an honest review.

Second, I have to warn readers of the potential triggers that you will find in this book. There is discussion of kidnapping, murder, violence, and drug use. This may be distressing for some readers.
Girl Eight is the second book in the Mercy Harbor Thriller series. Although this book can be read as a standalone, I highly recommend reading the first novel, The River Girls. Although the author provides brief explanations about the events in the first novel, much of the character development occurred in The River Girls.

In this second installment, Melinda Woodhall has crafted yet another edge-of-your-seat thriller. I didn't know I was capable of reading so fast. As the twists and turns emerged, I found myself reading faster and faster. A young woman has gone missing, and it is clear from the beginning who has abducted her. His accomplice, however, is a mysterious figure. The abductor and the accomplice have been working together for a decade, kidnapping girls whose disappearances will not draw much attention, if any.

Eden, Leo, and the detectives from the first book work together to determine whether an abduction has actually occurred and who is responsible, and suddenly, the action builds with increasing intensity as the pieces fall into place. My heart was pounding, and I was stressed out when the characters were not privy to clues that the author provided to me, as the reader. This book was a quick read (though, admittedly, I may have been speed-reading) and I completed it in just a few intense hours.

Tomorrow I will be diving straight into the third book in the series, and I am highly anticipating the release of the fourth book in the next week! So far, this series is highly entertaining and I am fully invested in reading all of the installments!

WILL ANOTHER GIRL BE ADDED TO A KILLER’S DEADLY COLLECTION?

In this gripping second book in the Mercy Harbor Thriller series, a ruthless serial killer, who has evaded detection for over a decade, is once again preying on Willow Bay’s most vulnerable women. Can the unlikely killer be stopped in time to save Girl Eight?

Eden Winthrop turns to Detective Nessa Ainsley for help after a vulnerable girl goes missing, and together they discover that a prolific serial killer lurks in the shadows of their small Florida town.

Determined to stop the remorseless killer before he takes his next victim, Eden realizes that to catch the killer, and to save the life of an innocent girl, she must be willing to put her own life in danger.

And as Leo Steele works to earn Eden’s trust and win her heart, his investigation into his mother’s death uncovers a series of abductions and murders that span more than a decade and reveals the horrifying truth that lies behind his own tragic past.