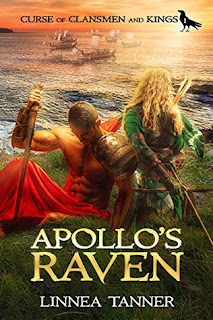 I have been looking for a new historical fantasy series to devour, but none had caught my eye until I was given the chance to read Apollo's Raven. There are few historical fantasy novels with enough conflict in the first book to be complex enough for a series. Linnea Tanner's first book in the Curse of Clansmen and Kings series delivers just enough conflict and relationship discord to establish a very strong foundation for a series without overwhelming the reader.

Catrin, a Celtic princess, has an unbreakable loyalty to her family. When Roman enemies arrive on her father's lands and start making demands, she surprises herself by defending the young Roman Marcellus, whom she has never met. When Marcellus is left as a ward in exchange for Catrin's elder sister Vala, the budding romance between Catrin and Marcellus threatens to damage both her reputation and her family's bond.

Her father, King Amren, is fighting to maintain his sovereignty against both the Romans and his Celtic rivals. His son, Marrock, whom he exiled for gruesome crimes, has joined forces with the Romans and his father's Celtic rivals with the intent to overthrow King Amren. But there is someone even more sinister with even deeper resentment for the king who is pulling the strings behind the scenes.

Catrin has the ability to connect with her Raven, allowing her to meld her mind with the bird, control its body, and see through its eyes. This special magic sets her apart and establishes her as the key piece in a curse set upon King Amren decades ago. This curse is to be his demise unless Catrin can stop it.

This book has a fascinating blend of historical and magical elements, drawing from Celtic, Greek, and Roman history and lore. Female Celts are portrayed as strong—wearing battle dress, wielding weapons, leading men, and fighting in battles—stunning the patriarchal Romans. The novel is well-researched, the characters are well-developed, and the world-building is fantastic.

My only real complaints are, first, that the chapter titles are essentially spoilers. I suggest that you ignore them. Second, the scenes in which Catrin melds her mind with that of her raven are confusing. I felt that they could have been portrayed more clearly.

This book ends on a major cliffhanger. In fact, it really doesn't "end" at all, as the second book picks up right in the middle of the scene in which the first book ends. This commits you to reading the series. I do not mind this, as the book was wonderful and I have already purchased the second and third books in the series. There is enough conflict occurring in this book that it would not make sense for all of it to be resolved in a single installment, anyhow. So far, the book has five promised books, and I look forward to all of them.

A Celtic warrior princess is torn between her forbidden love for the enemy and duty to her people.

Award-winning Apollo's Raven sweeps you into an epic Celtic tale of forbidden love, mythological adventure, and political intrigue in Ancient Rome and Britannia. In 24 AD British kings hand-picked by Rome to rule are fighting each other for power. King Amren’s former queen, a powerful Druid, has cast a curse that Blood Wolf and the Raven will rise and destroy him. The king’s daughter, Catrin, learns to her dismay that she is the Raven and her banished half-brother is Blood Wolf. Trained as a warrior, Catrin must find a way to break the curse, but she is torn between her forbidden love for her father’s enemy, Marcellus, and loyalty to her people. She must summon the magic of the Ancient Druids to alter the dark prophecy that threatens the fates of everyone in her kingdom.

Will Catrin overcome and eradicate the ancient curse. Will she be able to embrace her forbidden love for Marcellus? Will she cease the war between Blood Wolf and King Amren and save her kingdom?