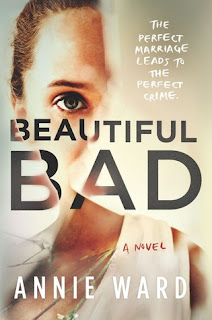 First, I would like to thank Park Row (Harlequin) Publishing and Netgalley for providing me with a free Kindle ARC in exchange for my honest review.

Annie Ward’s Beautiful Bad transports the reader between third-world war-stricken countries and the small town of Meadowlark, Kansas as it follows multiple timelines. Maddie lives a life of thrills and living on the edge of danger as an instructor and travel writer in her twenties, where she meets Ian, a British bodyguard with a dark allure. Twenty-six years later, we find Maddie in the present, in which she is now married to Ian in Kansas, where they live with their young son Charlie despite Maddie’s worldly nature. We also find Diane, a patrol cop, entering an active crime scene at the couple’s home where an ominous pool of blood confirms that someone inside that house is dead.

Ms. Ward does a fantastic job of making the jumps between timelines fluid for the reader. Nothing is more aggravating than struggling to orient oneself from chapter to chapter, but Ms. Ward bridges the transitions expertly. In order to gain context for how we have come to the point where someone has been murdered, we must understand each character’s past. The reader accompanies Maddie as she visits her eccentric psychologist, who is determined to establish that Maddie has suffered a traumatic brain injury (TBI) at the hands of her husband, despite Maddie’s insistence that she fell. The reader follows Ian through his numerous jobs in the military and in security, where he suffers near-death and otherwise traumatizing experiences that have led to the development of post-traumatic stress disorder (PTSD). Both Maddie and Ian live in paranoia and tend to catastrophize world events, imagining those dangers coming to their small town and destroying the ones they love.

Overall, I was completely engrossed in this book, finding myself with the urge to read at stoplights (which I avoided, painfully). Everything leading up to the end was a fantastic experience; it is just the end itself that left me feeling at a loss. Perhaps I do not agree with the author’s choice of direction, but I also feel that this was the least developed part of the book. I can see how she came to the decision to end it in the way she did, but I do not feel she expresses those reasons adequately for the reader, especially if the reader has no prior understanding of TBI or PTSD. For this reason, I feel that a near-perfect book was cheated of the perfect rating it deserved, and I feel that 4.5 stars is appropriate.

I would recommend this book for anyone interested in psychological suspense and domestic thrillers.

There are two sides to every story… And every person.

Maddie and Ian’s love story began with a chance encounter at a party overseas, while she was a travel writer visiting her best friend, Jo. Now almost two decades later, married with a beautiful son, Charlie, they are living the perfect suburban life in Middle America. But when a camping accident leaves Maddie badly scarred, she begins attending writing therapy, where she gradually reveals her fears about Ian; her concerns for the safety of their young son; and the couple’s tangled and tumultuous past with Jo.

From the Balkans to England, Iraq to Manhattan, and finally to an ordinary family home in Kansas, sixteen years of love and fear, adventure and suspicion culminate in The Day of the Killing, when a frantic 911 call summons the police to the scene of a shocking crime.