Catch the Girl by Melinda Woodhall 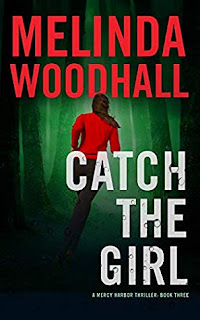 First, I would like to thank BookSirens and the author for providing me with a free Kindle ARC of this novel in exchange for an honest review.

Catch the Girl is the third book in the Mercy Harbor Thriller series. Although this book can be read as a standalone, I highly recommend reading the first two novels, The River Girls and Girl Eight. Although the author provides brief explanations about the events in the first two novels, much of the character development occurred in The River Girls.

Catch the Girl maintains the same level of heart-pounding suspense that I have come to expect from a Woodhall novel. We have a fantastic team dedicated to saving the lives of women and girls in danger. Despite multiple crooked cops being exposed in the Willow Bay Police Department, Nessa, Jankowski, and retired detective Barker uphold justice and continuously put the safety of these women above all else. Our other heroes, including Eden, Reggie, Leo, and Frankie, also never hesitate to act when a woman's life is on the line, frequently risking personal safety.

I was happy to see that this book contains more content about the characters' personal relationships than the previous installment. Being able to see how these events affect their personal lives makes them more relatable, and as a reader, I am cheering for each character's happily-ever-after. This is not meant to imply that this is a romantic series, because it really is not; for instance, my hope for Nessa is that her marriage will remain strong despite her long hours and limitless ambition.

On that note, I am happy that Barker is finally searching for his daughter. Taylor had walked out after her mother died, blaming her father for causing her mother's cancer with his cigarette smoking. In his search, he discovers a strange commune with shady characters, and when two girls are murdered and traced back to the commune, his desperation to find his daughter intensifies.

There are just a couple scenes that were unrealistic, which is why I cannot give this book a perfect rating. For instance, the National Guard would never let a soldier use weapons for a civilian investigation. Not in a million years. Especially since this case has absolutely zero relation to national security. Being in the military myself, this irked me. Aside from this, I thoroughly enjoyed this book and I am excited to embark on the newly released fourth installment, Girls Who Lie.

Can a vengeful killer be stopped before the next girl dies?

In this gripping third book in the Mercy Harbor Thriller series, a troubled young woman seeks refuge within an isolated Florida commune. After two of her friends go missing, she suspects the peaceful community hides a deadly secret, and soon realizes that she has become the target of a heartless killer.

Retired detective Pete Barker vows to find his runaway daughter and bring her home. When his search leads him to Florida’s swampy backwoods, he uncovers an unsettling connection between a secretive commune and a series of grisly murders.

Desperate to save his daughter, and determined to catch the twisted killer, Barker turns to his ex-partner, Detective Nessa Ainsley, and enlists the help of Eden Winthrop, a woman dedicated to saving Willow Bay’s most vulnerable citizens.

But as the killer’s shocking motive is unveiled, and the body of yet another innocent victim is discovered, Barker’s last chance to save his daughter brings him face-to-face with pure evil.