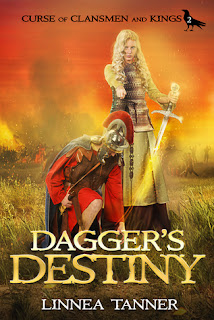 Dagger's Destiny is the second book in Linnea Tanner's remarkable Curse of Clansmen and Kings series. It is imperative that you read Apollo's Raven prior to embarking on this novel. Not only does Dagger's Destiny pick up right where Apollo's Raven ended, but only minimal summary is provided of the events that occurred in the first book. There are numerous conflicts at play in this series, and I do not expect the majority of them to be resolved until the series concludes. At the time of this review, five books have been promised by the author for this series!

In comparison to the first book, Dagger's Destiny is overflowing with action sequences. I was really impressed by the ruthlessness of the author in the narrative. It was reminiscent of scenes from George R.R. Martin's A Song of Ice and Fire series. The brutality may be difficult for some readers, but it gives the book a realistic quality. Whereas most fantasy novels try to give every character a "happily ever after," this author will not spare your feelings. Consider yourself warned!

Like the first book, this book ends abruptly. It ends so suddenly, in fact, that I did not realize it had even ended until I reached the endnotes! This may be something that turns off some readers, but I quite enjoy it. It can become irritating when every book in a series spends time winding down at the end of one book and then reiterating events for several pages at the beginning of the next book. In contrast, this series reads like one large epic saga broken into several parts.

If you enjoy historical fantasy, Roman history, Celtic history, and/or epic sagas, you will treasure this series!

A Celtic warrior princess accused of treason for aiding her enemy lover must win back her father’s love and trust.

In the rich and vibrant tale, Author Linnea Tanner continues the story of Catrin and Marcellus that began with the awarding-winning novel APOLLO’S RAVEN in the Curse of Clansmen and Kings Series. Book 2: DAGGER’S DESTINY sweeps you into an epic tale of forbidden love, mythological adventure, and political intrigue in Ancient Rome and Britannia.

War looms over 24 AD Britannia where rival tribal rulers fight each other for power and the Romans threaten to invade to settle their political differences. King Amren accuses his daughter, Catrin, of treason for aiding the Roman enemy and her lover, Marcellus. The ultimate punishment is death unless she can redeem herself. She must prove loyalty to her father by forsaking Marcellus and defending their kingdom—even to the death. Forged into a warrior, she must overcome tribulations and make the right decisions on her quest to break the curse that foretells her banished half-brother and the Roman Empire will destroy their kingdom.

Yet, when Catrin again reunites with Marcellus, she is torn between her love for him and duty to King Amren. She must ultimately face her greatest challenger who could destroy her life, freedom, and humanity.

Will Catrin finally break the ancient prophecy that looms over her kingdom? Will she abandon her forbidden love for Marcellus to win back her father’s trust and love? Can King Amren balance his brutality to maintain power with the love he feels for Catrin?